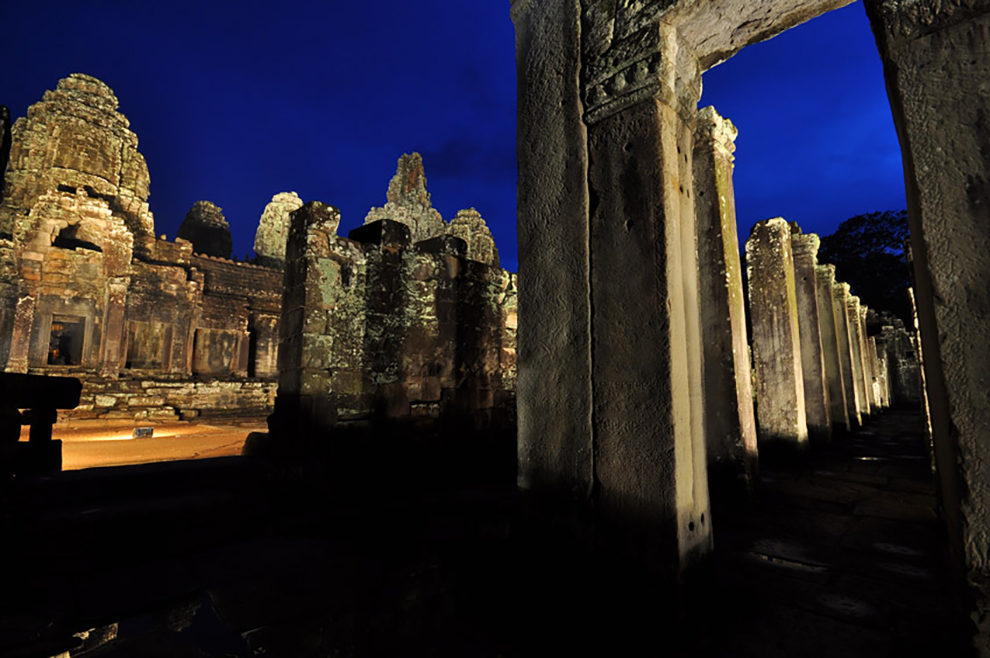 For the uninitiated, a visit to Cambodia's famed archaeological wonder, Angkor, can be a bewildering ordeal.
Imagine this scenario:
You've dragged yourself out of bed at 4 a.m. to elbow through hundreds of other camera-clutching tourists angling for the perfect sunrise shot at Angkor Wat.
A couple hours later, you find yourself waiting in a line to get a photo in front of a section of the famed Ta Prohm -- better known as the "Tomb Raider" temple, thanks to its appearance in the film -- with its surreal trees that appear to be slowly consuming the stones with their ravenous gnarled roots.
Your Indiana Jones visions of yourself, the Cambodian jungle and a landscape of wild ruins have been shattered.
You end the day with little more than sore feet and a memory card full of similar-looking photos that'll mean little to you in 10 years -- long after the quick history lesson you pulled out of your guidebook has slipped away.
Pretty grim, but it's a scenario repeated thousands of times a week.
It doesn't have to be that way.
Angkor is, after all, one of the most incredible archaeological sites on the planet, a 400-square-kilometer wonder filled with limitless beauty, intrigue and even a few remarkable quirks.
We called on leading archaeologists and guides, famous for their work in the Angkor complex, to share some tips and favorite corners visitors can seek out to add insight to their visits.

It's not a temple complex

The first thing to remember is that this is not just a cluster of ruined temples.

While much of the focus of past Angkor research has been on the temple sites, thanks to the recent use of LiDAR technology -- an airborne laser survey -- they've recently learned that these temples were integrated into a humungous network of roads, house mounds, canals, ponds and temples across the Cambodian countryside.
Archaeologists are still trying to figure out what led to its collapse.
One of the men leading that pursuit is Roland Fletcher, co-director of the Greater Angkor Project (GAP) 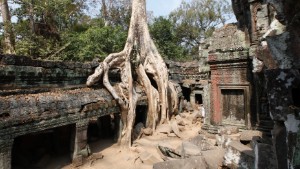 Ta Prohm is famed for its large trees, which appear to be slowly consuming the temple's stones .

The archaeologist, who has 15 years of experience at the UNESCO World Heritage Site, says visits will mean more if you view the place for what it was -- a massive urban center, with many working parts."Tourists need to get away from the notion that Angkor is a bunch of temples and understand the basic idea that Angkor is a huge city with some temples in it, just like New York is a huge city with lots of churches and a couple cathedrals in it.Also, bear in mind this city wasn't buried in the jungle.The whole landscape was completely cleared and filled with rice fields, while temples and palaces were covered in gold.
Fletcher cites Ta Prohm, which was built in the late 12th and early 13th centuries, as an example.
"We know from an inscription there that its working staff was 12,640 people," he says.
"A little further down, 66,625 farmers were indentured to deliver the food that staff required. They were not living in the jungle either. And that's for one medium sized temple."
Fletcher says visitors should hit sites according to when they were built, given the varying ruins span several centuries.
"When I run tours there, I take people around the temples in chronological order, not locational," he says.
"If you do it in locational order it's a complete mental shambles. You've no idea what's going on. The place is so huge, you're hot and tired. It's hard work."

Regardless of whether you decide to see it first or last, when you do get to Angkor Wat, arguably the world's most famous temple ruin, it's worth pulling yourself from those beautiful towers and artwork to acquaint yourself with the local protector, a beautiful statue located in a hall close to the west entrance.

Believed to be made in the image of Vishnu, the Hindu god, it's actually one of the most important sites in all of Angkor for locals, says archaeologist Alison Carter, who has been working in Cambodia for about 10 years and on GAP since 2011. 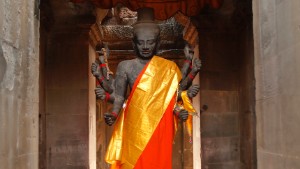 Many tourists walk right by this Vishnu statue near the west entrance of Angkor Wat without realizing its significance, says Alison Carter.

"The statue is likely of Vishnu (it's not clear), but inhabited by this powerful local spirit," she says.
"One of my Cambodian colleagues describes him as the governor of all the ancestor spirits in Siem Reap."
Though the statue is ancient, she says it does post-date the Angkor Wat temple.
"Because of its importance, it is regularly visited and attended to, so respectful, quiet and unobtrusive tourists can see a glimpse of the rich Cambodian spiritual life by observing people making offerings. I think it's a nice symbol of the continuity between past and present."

Last year, archaeologist Noel Hidalgo Tan of the Southeast Asian Regional Centre for Archeology and Fine Arts, caused a global stir when his digitally enhanced photographs of paintings taken of the walls at Angkor Wat were made public.
His photos gave researchers an entirely new look at the art, which some believe were painted in the 1500s after the fall of Angkor. 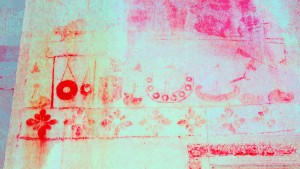 Noel Hidalgo Tan discovered these paintings of deities, animals and musical instruments on the walls of Angkor Wat in 2010.

The artwork includes images of instruments, buildings and animals.
Tan says anyone can seek out those paintings, found throughout the temple, take photos and download the software to analyze them at home.
"They're not totally invisible but if you're not looking for them, you won't see them," he says.
These include a remarkable European-style ship.
"First of all, sailboats didn't go to that part of Cambodia, so it's an indication of contact somewhere along the way -- someone saw a European sailboat and drew it on Angkor Wat," he says.

That's not a stegosaurus. Or is it?

Inside Ta Prohm, away from the gnarled trees that attract all the tourists' attention, there's a vertical series of wall carvings of small animals, such as monkeys and birds.

But what jumps out is a little carving of what appears to be a stegosaurus.

In recent years, creationists have tried to use it as evidence that humans once walked the earth with dinosaurs. 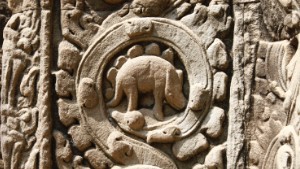 Stegosaurus fossil? Pangolin? The experts are divided on this one.

Another theory is that someone, somehow, caught a glimpse of a dinosaur fossil and decided to craft an image of it in the temple wall.
Others say it's not a dinosaur at all, but an animal with some funky decorative touches.
Carter says she thinks it's a pangolin.
Fletcher has another view.
"Several of my colleagues have looked at it and it appears to actually be a buffalo with a standard decorative motif used by the Khmer artists," he says.

Ease the burden -- and avoid the crowds

One of the biggest issues at the Angkor Archaeological Park is that a few major sites -- namely Angkor Wat, Angkor Thom and the Bayon -- endure the bulk of tourist traffic.
"I think there are a lot of factors that contribute to this unevenness," says Carter.
For one, two of the most visited temples, Angkor Wat and the Bayon, are perhaps the most spectacular and are really must-sees, she says. 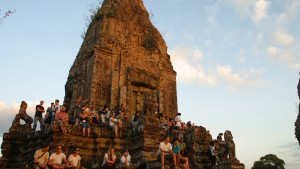 "Also, I think the traditional temple 'circuits' became engrained in guide books and perpetuated by guides and tour companies."
She suggests trying to hit up major sites, like Angkor and the Bayon, at noon when many tour buses go back to Siem Reap for lunch.
"If you stay flexible, you can visit places when it seems like there's a gap in the crowds," says Carter.
"If you're on your way to see Ta Prohm and a tour bus just drops off a huge group, it's probably worth it to double-back and visit nearby Preah Khan instead."
Carter says the authorities are working to overcome this overcrowding and a comprehensive Tourism Management Plan has been created.
"One of their recent efforts has been to get people to watch the sunset at different locations around the park. They actually created a great website where you can find fun places to watch the sunset.

"Making people aware of alternatives will take a little time, but I'm hopeful that in the next few years people will start having a more diverse experience at Angkor and this will be good for both the tourists and the many sites in the park."

Part of the problem is that tourists simply don't have enough time to adequately explore.

"I think most tourists come for three days and that allows for people to see a very large chunk of the park," says Carter.

"But extending your trip a day or two means you'll get to see temples and places that are more off the beaten track, like the sites on Phnom Kulen, Beng Mealea, even Banteay Srei. Plus, then you have plenty of time to rest and relax in Siem Reap between excursions."
Another lesser-known temple to visit is Chau Srei Vibol, she says. 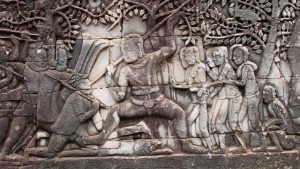 The Bayon's intriguing bas-reliefs are outshined by its famous face-covered towers.

"It's an unusual temple for having such a large moat. It's also a beautiful site and home to a modern Buddhist temple, so the juxtaposition of old and new is striking."

Carter also recommends taking time to explore some of the other parts of the busiest areas.

One of her personal favorite trips is to walk along part of the wall around Angkor Thom, where overgrown areas cover what was once a thriving city.

She also recommends getting away from the ruins completely and heading to Angkor's ancient reservoir, West Baray, on which construction is believed to have begun in the 11th century.

"I think almost no tourists go to visit the West Baray, but it is an amazing feat of human ingenuity and engineering and a relaxing trip," she says.

Fletcher echoes this, saying there's a lot more to see in Angkor than just ruins, and suggests a minimum of five days to explore.

"Really what you need to do is look at water, because water is how Angkor worked," he says.

"Go somewhere like the West Baray, which is just staggering. Sixteen square kilometers of engineered water. The guides have almost nothing to say about it all.

"The other thing is to go up into the hills, to the north of Angkor, to places like Kbal Spean and see the carved rivers on the top of the plateau behind Angkor."

"And then spend some time and see the Cambodian country side as it will give you some idea of what the place looked like," he says.

"It would have been quite something. It was very beautiful. Trees, green rice fields everywhere. Houses along the embankments. Then these unbelievable, fabulous gold temples sticking out of the trees.

Getting there: Several airlines fly directly to Siem Reap in Cambodia and many nationalities can get a 30-day tourist visa upon arrival for $30.

The Angkor Pass can be purchased at the entrance gate: One-day $20, three-day $40 and seven-day $60. Photographs, which are printed on the pass, will be taken on location.

If you wish to stay at one of the well-reputed hotels in Siem Reap like The Privilege Floor by LOTUS BLANC, book direct with the hotel or via email info@privilegefloor.com to get the best guaranteed rate.